Three Fridays in Jayyus at the wall

Three Fridays at Jayyus near the wall
In “The Mending Wall” Robert Frost wrote,
‘Before I built a wall I'd ask to know
What I was walling in or walling out,
And to whom I was like to give offence.
Something there is that doesn't love a wall,
That wants it down.'
Israel is constructing a barrier to segregate the Occupied Palestinian Territories. The Berlin wall was 4 meters high in most places. This wall is 8 meters high. In some areas the wall is concrete, in some razor wire or electrical fencing. There are pillboxes, control and observation towers, concrete roadblocks and trenches along the barrier. Checkpoints can stop both pedestrian and vehicular traffic for hours without any explanation except”security”. 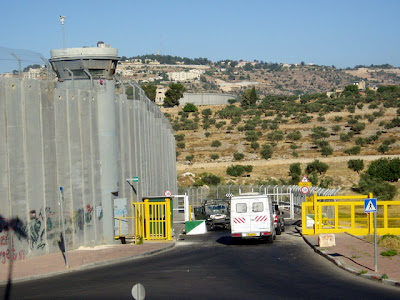 Section of the wall near Jerusalem 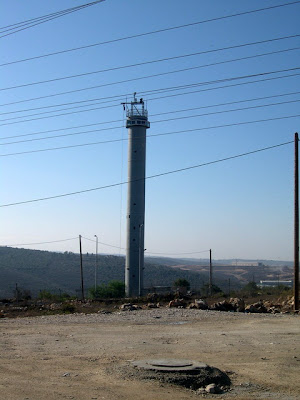 Contrary to Israel’s statements, the route of this wall is not along the green line (the armistice boundary declared after the 1948 war). The segregation wall is within the Occupied Palestinian Territories. Every year the United Nations publishes a map with the current cadastral locations of the barriers and the accepted green line. The map clearly shows the completed and planned routes that snake through Palestinian villages and impede movement. The wall is not built on Israel land. It is on the land of those who are occupied. It includes a “buffer zone”, or additional confiscated land that is needed to protect the wall that “protects” the citizens of Israel. The reasoning is as circular as the wall itself. 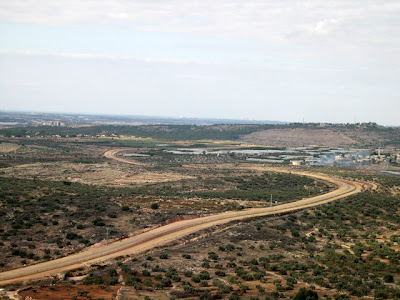 Route of the barrier curving around Jayyus' land 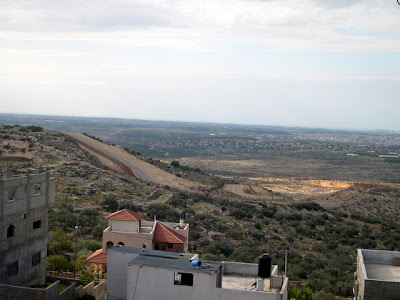 Continuation of the barrier route - upper left snaking through the land

The International Court of Justice declared the wall to be “contrary to International Law” in 2004.
Jayyus is a small village in the Qalqulia district of the West Bank, Palestine. The segregation wall circles Jayyus; 70% of the arable land is behind the segregation wall. From Dec. 9 to Dec. 20 in 2004, Israeli bulldozers uprooted about 750 olive trees for the wall and the buffer zone. The six artesian wells that have provided water for Jayyus are on the “wrong side of the wall”…for security reasons? Farmers must obtain permits to visit their land. Permits are scarce, for security reasons. So a 65 year old farmer may access his land but cannot bring young sons to help with the work. The old Ottoman Land Law of 1858 is in force. If a farmer does not work his land for three years it is confiscated by Israel. Some farmers have not been able to obtain permits in three years. Is it security or a land grab of fertile productive land?
So Jayyus has joined a long list of villages that are staging non-violent protests against the wall and to resist the Occupation. Every Friday the list of villages demonstrating against the Occupation grows, and more and more Palestinians gather at the wall or a roadblock to demand access to their land, their livelihood, their dignity,and their human rights. As the number of protesters grows, the question becomes more apparent, “Is this wall making you safer?” Did the wall around Gaza provide security?
On Friday the menu of local demonstrations was: Burqa, Jayyus, Nai’lin or Bi’ llin. This MPT team member chose Jayyus. When we arrived, the army was patrolling the village and stopped us before we reached the starting point. 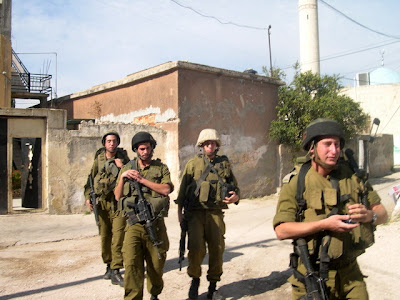 Soldiers approaching as we enter village 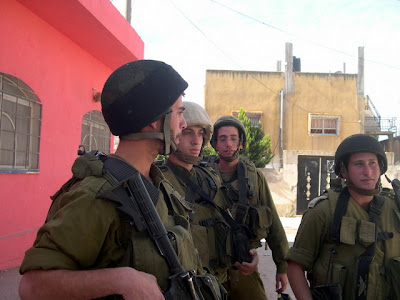 Asking for identification and passports

After a discussion we ignored their questions and met the other internationals gathering in the center of the village. 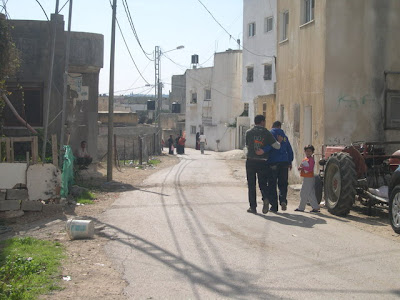 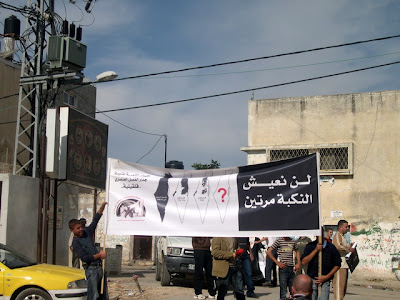 The army jeeps blocked the main road out of the village toward the gate in the wall. 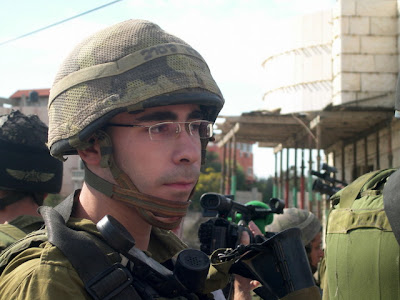 Some of us were able to slip past the block and some Palestinians took side streets to bypass the block. The soldiers found themselves surrounded by protesters, chanting in Arabic. They were obviously unnerved when they found themselves in the center of the demonstration and in close quarters. It was too confined to allow them to use tear gas, concussion grenades or the usual methods of crowd dispersal. They broke ranks, retreating down the road toward the wall and leaving some of the soldiers stationed outside the village. 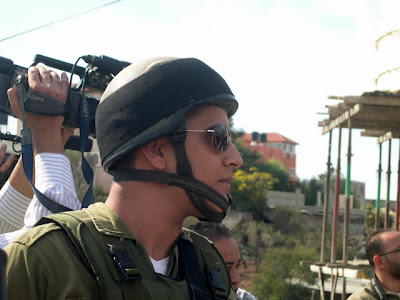 As we walked with the soldiers who were headed out of the crowd, a group of neighbor women came out of the houses to see what was happening. I linked arms with a Palestinian woman and smiled (because I have so little of the language and that is the only way I knew to communicate.) Soon there was a line of women with me following the soldiers, in djellaba or thawb and head scarves. The chant, “No, No, to the Wall” in Arabic rose up behind the military. The soldiers were anxious. As they spotted the army jeep positioned in the road they stopped and turned to face the crowd. 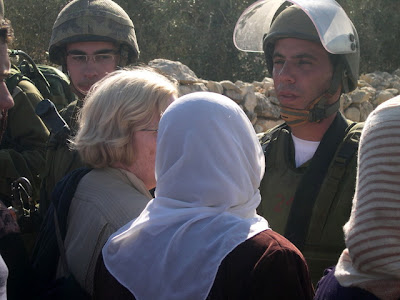 Most of the soldiers are very young men, some in their late teens. As they turned, they were toe to toe with a line of women old enough to be their mothers and grandmothers. The look of surprise and confusion on their faces “was priceless”, to quote a US commercial. I spoke quietly to the soldiers near me, explaining that we were not a threat,. We were standing in front of them in peace and pointing out that we could have been their mothers. I hoped I could reduce some of the tension and anxiety so that we could make our statement peacefully, without tear gas and bullets. The soldiers were uncomfortable with the situation. When that became apparent, more women, both Palestinian and international, reinforced our position. It was a feminist’s dream come true. Women empowered had brought soldiers to a standstill. After about thirty minutes and some jockeying for position, the soldiers tried to move their line forward. The women and the crowd standing behind us did not move. There was a crush of bodies but no movement on either side. We stood for a while longer. 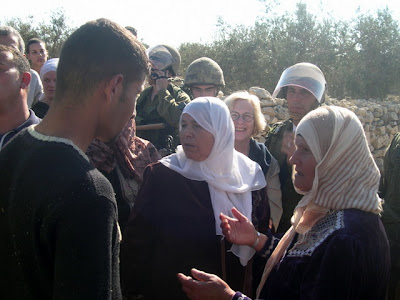 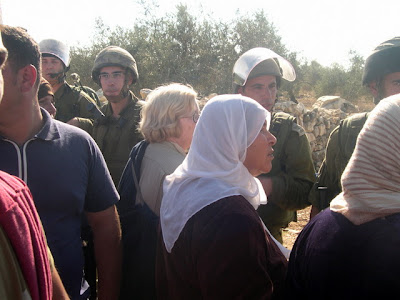 A military jeep came up behind us as though to plow through the line. They revved the engine. The women did not budge. After standing in from of the soldiers for an hour we sat on the road. There were piles of stones in the road and on either side. Photographers were scrambling over the rocks, filming and photographing the contrast of Palestinian and international women against a background of guns and olive drab uniforms. I was holding hands with the woman next to me and we all smiled up at the soldiers. The sweat was dripping off them. The leader of the demonstration brought us bottles of water. We took a drink and I offered it to the soldier. He was again confused and refused the drink. 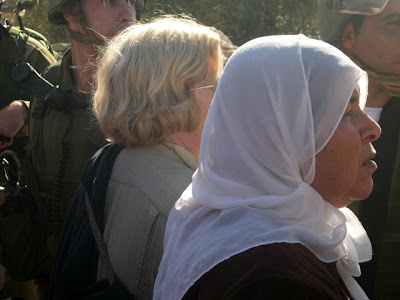 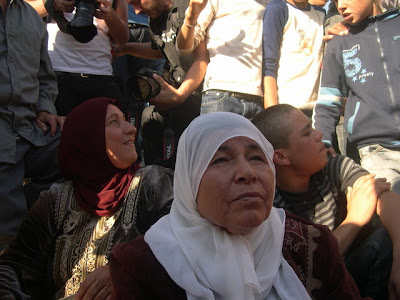 Seated in front of the army

The demonstration lasted about three hours. There were no rocks thrown. The head of the village took the loudspeaker and declared that we had expressed our resistance to the wall and the occupation and we should reconvene in the village municipality. I believe the Palestinians felt they had controlled some part of their day and had been able to show their disapproval of the segregation wall. 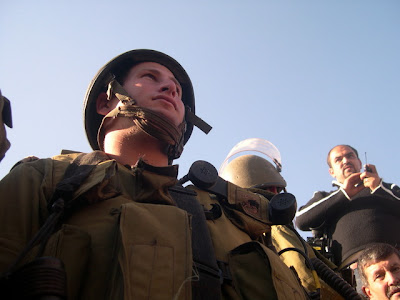 View of the army from below 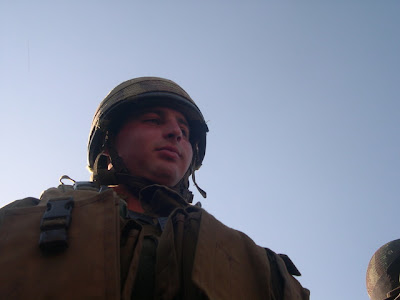 I felt so proud to have been with those women who were strong and determined to change the lives of their community. This one day was radically amazing because it worked. The protest was peaceful and effective.
Something there is that doesn’t love a wall that wants it down.

Posted by MPT Fall Team 08 in Palestine/Israel Labels: Anthology
Reading: Three Fridays in Jayyus at the wallPost Link to Twitter 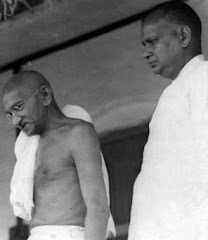